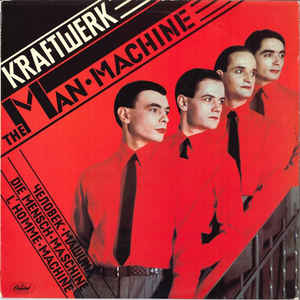 I’d been aware of Kraftwerk from their ‘Autobahn’ single a few years earlier, but nothing else. As the punk scene began to fragment at the end of the 1970’s the pace-setters to come next were the New Romantics and the New Wavers. They were looking for new sounds and styles and the synthesiser was readily available and harked back to the punk ethos of “anyone can do it” because of its ease to use. But the newer bands were still melding electronic music with traditional band line-ups. Kraftwerk had been doing their thing for at least a decade at that point, ignoring the two guitars, bass and drums set up and indeed with someone who could sing. The main point of ‘The Man Machine’ was that Kraftwerk had begun to introduce beats that you could dance to. I can remember this album getting played to death at Birmingham clubs such as Holy City Zoo and The Rum Runner.
-Marek


The sound of Der Mencsh Machine is, to me, like cities made of glass crackling with blue tongue licking lashes of electricity.

It is the most pop leaning record of the band's career to that point, with "The Model" being perhaps their best known piece and representing the band's success in honing the new technology they had been working with into instruments which could be accepted and embraced by generations of musical purists.

The Krautrock revolution, as it has become known (though when I mentioned the term to a German friend she did not know it and thought it rather insulting) was the sound of Germany looking to put it's past behind it, but not by jumping on the bandwagon of the popular American music dominating the airwaves. It was the search for a new identity from the ruins of a troubled history.


Its influence is far reaching. I could name LCD Soundsystem and Daft Punk songs that directly lift some of the melodies from Metropolis and The Robots without apology.
-Matthew 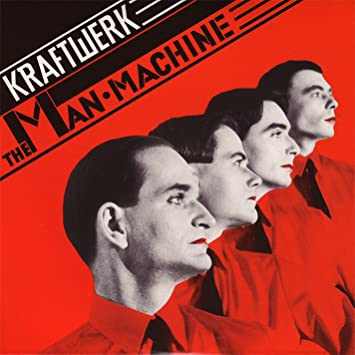 The Album Club Remixed is a new format for our regular music discussions which now happens virtually with recorded contributions from a growing band of volunteers.

In part a tribute to Florian Schneider who dies recently.

The final edit of the discussion will feature in The Unseen Swerve scheduled to broadcast on Tuesday 2nd June 2020 @7 pm on Switch Radio.
Posted by James Sandy at 06:45 No comments: 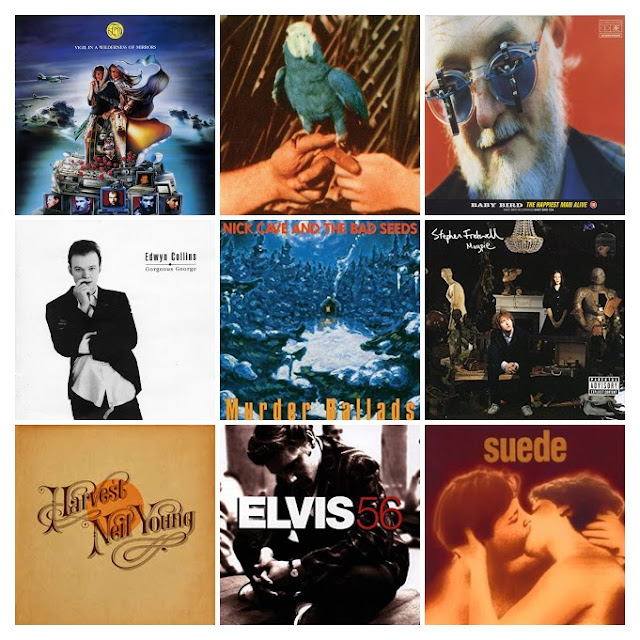 As I'm sure many of you have, I recently received an invitation from a good friend via facebook to post ten albums that have influenced or informed my musical tastes over the years. The deal was that you couldn't say anything about them or review them,  you just let the sleeve do the talking and then pass on the invitation to another good friend.

Lock down comes with many rules, but this one had to be broken. And so some personal reflections on my ten albums of influence...

In amongst the badly mixed paints and fractured half-pots of our school art room I heard the warn tones of this album. Our art teacher at the time (the mighty Mr Taylor) motivated our half attempts at art with tunes from a dying box amp or an occasional wander through the art room accompanied playing his own old battered guitar. This album dominated my weeks in the fifth year of secondary school. Sunday still doesn't seem right without hearing a track (or six).

Although initially unimpressed with Brett Anderson's frantic struts on TOTP one Thursday in March 1993, I soon grew to love the unworldly swirls and buzz saw guitars of this debut. I recall watching a BBC news documentary about lost kids and social issues with my parents at the time. It used almost the entire Suede album as its soundtrack. I was sold. My parents were less than enamoured (not quite James Last).

Vigil in a Wilderness of Mirrors by Fish

Having inherited the sounds of Marillion from an early age this album was destined to effect me in some way. I still have it on gatefold vinyl. The cover alone makes it a classic. It's songs are overly complicated stabs at pop-prog, but I still know most of the lyrics and find myself subconsciously singing the 'hits'. I think if anything I learnt that listening to music should be a serious business and that albums must be taken on as a long-term prospect- a relationship.

Gone are the soft country feedback twangs of Harvest (almost). This album came to me one evening via a BBC 2 repeat of MTV's flagging flagship show for people that just wanted to put a tape on. Looking like a discarded, rain soaked, hippy and clad in a 90s-tastic leather look jacket Neil channels something exceptional. After stopping traffic with solely a guitar he then launches near falsetto into twisted versions of his classics on a booming pump organ. This album made me listen to live albums more and differently. It told me lots about the spontaneity (or not) of songs and how they should sound on the tape- unmixed and unrefined.

Aside from Sean Hughes' regular references and blatant T-shirt worship, I didn't really know much about King Ink in the early 90s. Unsure of the Kylie duet I boldly invested in the album from Lancaster's now long gone Ear 'Ere Records (Penny Street). I nearly bust my stereo listening to this album. A macabre jaunt into the world of murder through a storybook of lost fairy tales. It took me years to work out that the odd sounding instrument on 'Stagger Lee' was- it is Blixa Bargeld constantly screaming. From hence forth I have been a massive Bad Seeds fan and have enjoyed the journey- bright and pure.

The Happiest Man Alive by Babybird

Stephen Jones is one of the most underated artists I could name. His output is prolific and the albums solid. This album made me think seriously about the mechanics of recording and the glory of back bedroom audio production. In truth it is part of the origin story of the King of the Buttons empire (film rights available). It taught me that there are not really any limitations in creativity- whatever kind. You should follow that idea, however mad (It's also got some guilt free dance-a-longs on it).

Are you serious by Andrew Bird

In the summer of 2016 this open ended statement/question took on a whole new significance for me as the country declared splendid isolationism to a world crying out for solidarity. How Andrew Bird manages to construct and deconstruct in such a hip swinging manner I really don't know. And so, the language of soulful defiance beyond rhetoric became clearer to me.

Drifting into a peaceful dream one night in my flatpack Swindon exec pad I recalled a late guest on Mark Radcliffe's holy BBC R2 show. A few days later this album appeared as a welcome leaving gift from an equally welcome comrade. It is the throw away, casual tone of the album that warrants endless listening. It is music that is of a moment, for a moment and that lives in the moment. Magpie is an opportunist of a record that reminds me that music is as vital as coffee.

All religions have their deities. All dogs have their day. 1956 was the year in which the messiah jolted every notion of sensible blues and teen music with the lunging devil of rock'n'roll. EAP is captured without the fluff, without the burgers and with the full ammunition of a lost boy making the world of music his own. Cheap compilations and magazine freebies to the floor. This disk made me take Elvis seriously.

The last of the go-getters. An energetic collection of songs that describes the passing of an age, the death of 'indie' and the nonsense of the big bucks festival. A 60's sound reheated to challenge the very revolutions that it inspired. Intelligent pop without involving Neil Tennant- It's possible? 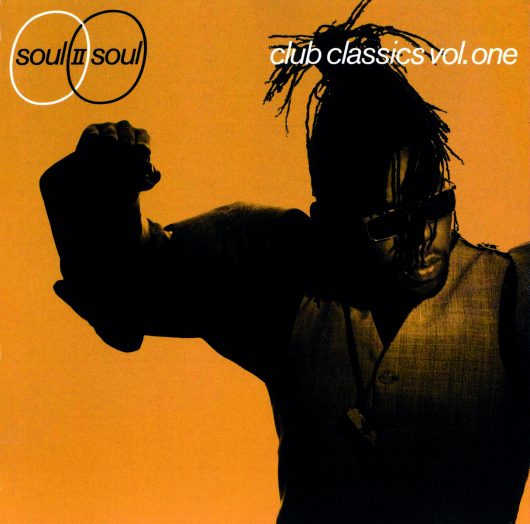 Soul II Soul, evocative sounding isn't it?!? Getting illusions of tasting the Godfathers Jimmy B or Georgie C? Don't, because this sure aint Soul and it definitely aint funky so if you're hungry for either you've come to the wrong place.. This is 1989 and this is, erm.... well, R&B is probably were you'd find it (mis)filed in the shiny racks of HMV, Virgin or Woolworths.

If there is any message, political or otherwise, regarding the times and the origins of these 'tunes' it is more than subtly hidden behind breakbeats and heavily synthesised strings. Is this music to dance to? Is it music to chill out to?  It fails both tests but fortunately we have the eponymous Mr B explain on 'Jazzie's Groove' that this is just him and his London crew with their sound system making some music as they've always done.  Unfortunately labeling this long player as some sort of antidote to the Second Summer of Love rave scene is probably the kindest I can personally muster.

The dawn of this ground breaking new decade shouldn't be remembered for the saturation of television screens of Soul II Soul in their yard swaying to the 'Back to Life' video. 1989 saw notable releases from Faith No More, Stone Roses, The Pixies, The Cure, (not to mention Nirvana's Bleach) all hitting the shelves around the time of this album. So, remember for a real recipe of soul and elusive funk De La Soul's Three Feet High and Rising was there to be devoured too. Now that is a real club classic to feast upon. Peace out Funki Dreds.